I had a few fun shows this week... On Thursday, I had a solid twenty-six minute set at Dempsey's at Oriole Park in Baltimore, Maryland.  This show was tough to close out because it was following an open mic contest... but my set was passable.

On Friday and Saturday, I got to work with Rich Vos and Bonnie McFarlane (which is always a pleasure).  My twelve minute Friday set was incredibly solid and a good time.  The Saturday show was fine (though the crowd was a little more subdued).  My twelve minute set was good despite the crowd being tricky to warm up.

My highlight for the weekend was when I walked off stage (on Friday), Vos said to me "Good set... I didn't listen to it but I heard the laughs".  I caught this moment on my iPhone recording.  I might make it my ringtone.  Overall, the weekend with Rich and Bonnie went well and I look forward to working with Rich again at Magooby's next week,

After the show on Saturday, I had a very good set at the Drafthouse open mic.  I did two new-ish bits (that are ready for clubs now) and an older bit that I wanted to knock the dust off of.  Overall, this was a very good set.

I had two sets last night... the first of which came at RiRa in Arlington, Virginia.  The (packed) crowd was great and my eight minute set went over very well.  I started out with two short marriage jokes and then focused on a longer story.  The crowd was friendly, attentive and stuck with me the whole way.  I wish more crowds were like the one at RiRa last night.

My second set was at Caoco Lane in Ellicott City, Maryland.  This show was basically a work shop and I had a decent to middling ten minute set.  Doing mostly new jokes and improv, I got laughs throughout the set and found 1-2 good new jokes.  We'll chalk this one up in the "win column".

I had a fun sixteen minute set in the sideroom at the Arlington Drafthouse on Thursday.  The crowd was a little hard to warm up and I started slow but everything was clicking by the end.  The last half of my set was really clicking and I'll consider this show an overall success.

After Drafthouse, I had a very successful last minute weekend at Magooby's Joke House in Timonium.  I hosted for Nick Dipaolo and Joe List for three shows and had a great time.  The late show on Friday was surprisingly good with a with a tired but (thankfully) not a rowdy crowd.  Though the crowd was a little more subdued, I had a very good set.

Both Saturday shows were sold out and could not have gone better.  In my opinion, there is no better room in the area when Magooby's is full.  With tiered stadium seating, the laughs trickle down and gives the room the feel of a big theater show.  Both crowds were great and I had my best hosting sets (to date) at the club.  I learned a lot and had a great time watching basketball with Joe and Nick (who is sincerely one of my favorite comedians working).

This is how I feel when the audience talks during the show...

Posted by Mike Finazzo at Wednesday, March 20, 2013 No comments:

My fifty-seventh set of the year took place at Sully's in Chantily, Virginia.  My forty minute set was solid and was a nice warm up for the next night at the Avalon Theatre in Easton, Maryland.  I had a great forty-five minute set in Easton, which included roughly forty minutes that was not on my CD.  This show gave me a lot of confidence as a long form comedian and happy with the state of my current long set.

I spent the week working on new stuff at Sidebar and Touchdown as well as further polishing my headliner set at Codmother in Washington, DC.  Codmother was a great venue and had a really hot crowd.  My thirty-five minute set went over great and did not feel like too much work.  This crowd was attentive and incredibly responsive.  I wish more crowds matched this particular audience's enthusiasm and intelligence.  Overall, this was a great show.

I spent my five minute set at Judy's Restaurant in Washington, DC refining the bits/ideas I worked on at Sidebar and Touchdown.  The tale of the "The girl that didn't look like Natalie Portman" is going to be a really good bit once I work out the kinks.  I hope to work on this bit more during this coming week.

I mentioned in a previous post that my mom was having health issues.  Without going into too many details, she had a major setback on Friday.  This caused me to cancel a trip that my wife and I had planned in New York.  I didn't have any shows planned for this trip, but I was very much looking forward to hanging out at the historic Comedy Cellar in Greenwich.  Instead, I spent 20 hours in a hospital on Friday and Saturday.

Tired... I felt the need to get on stage and did so at Magooby's Joke House on Saturday.  I was lucky enough to grab a guest set, which went very well (despite one tag that I'm going to cut in the future).  I focused on doing bits that I haven't done at this venue before, and all of it went over swimmingly.  This was a very fun show and a nice relief/release from "real life".

I'm really behind on this blog... I've been busy.  I am sorry.  All of these sets were mediocre.  That is the best I can do right now.


I have another week and a half of shows to catch on after this.  I'll try to be more in depth about those (because there were some good ones in there).
Posted by Mike Finazzo at Saturday, March 16, 2013 No comments:

Despite the fact that Wayne Newton and I are now connected forever... this picture raises three interesting thoughts (to me anyway). 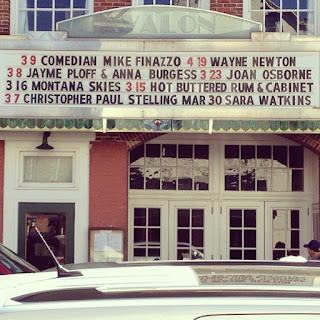 1) I hope that someday I get to the point where promoters do not have to specify that I'm a comedian to sell tickets.

2) I still feel weird calling myself a "comedian".  A boy is not really a "comedian" until we lists it as his profession on facebook.  Duh!

3) I'm on a marquee with Joan Osborne!  This raises the question... "What if God was one of us"?
All kidding aside.. this is pretty neat and humbling and I'm looking forward to a great show at the Stolz Listening Room at the historic Avalon Theatre on Saturday.  I hope to see you there!
Posted by Mike Finazzo at Monday, March 04, 2013 No comments:

I knew that the show at Slainte was going to be rough when I showed up and they were duct taping a flash light to the wall. That was the "lighting set up." There was no stage. There were two rooms seperated by stairs. The showrunners set up a microphone stand on the middle step. I guess that was the stage. Between the two rooms there were about fifty people but only six of them knew they were attending a comedy show. It's always fun when comedy springs up on a crowd and interrupts "dinner and drinks night."

The first comedian was my friend Stavros Halkias (Magooby's New Comedian of the Year). He's a really funny guy but struggled mightily at this show. At one point a woman yelled "Get off the stage." Stavros responded "I can't get off the stage. I'm standing on a pile of stairs." That made it all worth it.

I decided to take my eighteen minute set mobile. The mic was wireless and I walked back and forth between the two rooms with it. When one side of the room got loud, I would walk over to them and tell my jokes. This was pretty effective in quieting whichever side was talking loudly.

I'm at my best when I can take my time and tell stories. This venue was not conduive to my skill set (nor conducive to any comedy for that matter). I found myself yelling short jokes at whoever was paying attention. It wasn't my best but it ended up being eighteen minutes of survival skills and scattered laughs. To put it in perspective, when you do well in comedy it's called "killing." When you door poorly it's called "eating a dick." I did not let this room force feed me that dick... though it got really close to my face a few times.

This is my dream... this is show business.

I had two shows on Thursday with mixed results...

First, my eight minute set at the Topaz Hotel in Washington, DC was simply "eh".  This is a great room and features some of the best comics in the area every week.  However, this can also be a tough crowd to warm up and it is preferable to go up later in the show.  For this set, I went second in the order and had just an okay set.  I had a few nice laughs but a lot of things did not hit the way they usually do.  I think performing in this room more will help me learn and adjust to the energy in the room.  Experience will help those "early in the lineup" sets.

After Topaz, I drove to RFD in Chinatown.  I've referenced this room a lot in the past and always enjoy my time there.  Usually this is a very "hot" room (I've joked that I could "fart in this room and get an applause break") but for some reason it was very tired on Thursday.  Before my set, I noticed that the crowd was tight and lethargic.  In response to that, I decided to "amp up" my performance and probably had one of the more intense five minutes I've ever had on stage and the results were great.

I had a really good set with big laughs and three legitimate applause breaks.  It's nice to know that I have a different gear that I can go to when I need it.  Though this was a really good set... it was far from perfect (no sets are).  When I listened back to the set, I noticed that I stepped on two laughs that could have been bigger.  This may have been a product of being too amped up and overly aggressive.  I'll have to remember that for next time.