The War for Late Night 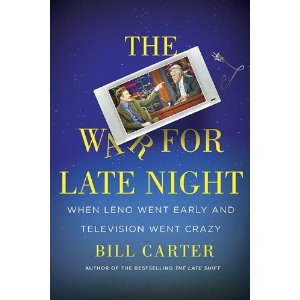 I bought Bill Carter's "The War for Late Night" Friday and just finished it. At four-hundred pages, the book is an incredibly well written and amazingly detailed account of the whole Conan/Leno debacle. As a Conan supporter, I appreciated the book's honest analysis and detailed account of his career and insight of all of the players involved in late night comedy. As a reader I enjoyed Carter's novelistic and entertaining account of the late night wars and network politics. The book is definitely a "must read".

With Regards to Mel Gibson and Charlie Sheen

Hello friends (Mom, Laura, Anne, random person that stumbles across this, etc)... How are you? I am fine. I've been busy doing a lot of stand up and various projects recently.  Mainly I've been writing and performing stand up, working on movies, and a full-time job.  Oh yeah, I'm getting married too...  That takes up some time.  I also own a cat now.  Its kind of like having a child but its cuter and can poop in a litter box.  My cat's name is Digby.  He's pretty awesome...


In stand up news.... I've been writing a lot of new material.  George Carlin and Louie C.K., my two comedic idols had/have a tradition where they write a new hour of stand up every year and then get rid of it and start fresh. They use this as a tool to stay sharp but also to get better.  Logic says, if you keep doing something, you should get better at it. Why keep repeating yourself and doing the same thing you did years ago? I think that's a pretty cool practice and something I'm trying to do.  I tend to write in sections (i.e. I work on ten minutes and then work on the next ten minutes and so on... When I have longer sets in the 15-20 minute range, I mix and match a set out of each 10 minutes). Right now, I'm working on my third section.  I got to do my new set at Baltimore Comedy Factory this past Saturday... I had a great time opening for a Philly comic named Turae (check him out if you get a chance). The new stuff went over very well.  I enjoy doing it because its more personal and in a lot ways more relatable.  It still needs some polishing, but I think section three is my best section yet.
I was doing a show at Illusions recently and met Andrew Larsen and Sasha Borodovsky. They're really nice people that host a radio show twice a week for WJHU.  Chris Barylick (who also performed at Illusions) also appeared on the show.  Chris and I sat in for the entire two hour segment and had a good time. We talked about the show at Illusions, current events and had a conversation with New York Gubernatorial candidate Jimmy McMillan.  I also shared a few stories about my stand up experiences and random celebrity encounters.  It was a good time, and I really appreciated Andrew and Sasha having us on. The episode is podcasted so if you'd like to listen check it out:

(Warning: The show contains bad language and adult content)
I've also been working on a few movie projects.... My good friend Anthony Jackson is a talented and up and coming filmmaker.  He has directed over fifty short films and is finally beginning work on his feature debut. I've been co-writing the script with Anthony and I'll also be appearing the film. Its a cool Relationship Dramady with a pretty big ensemble. Think Boogie Nights meets Garden State. I'm excited about the script and know Anthony will knock the ball out of the park with his first feature.
I'm also putting the finishing touches on my second feature film, Pavement Tune (which Anthony also worked on). I met with my producer and sound designer Zarieff this past week and we are a few weeks away from having a 100% completed film. The movie turned out well, and I'm really looking forward to sharing it with everybody. In addition to finishing the sound, Z also put together the movie's first poster. We had been kicking around poster concepts for a while... Zarieff and I really liked the idea of Punk-rock imagery and a D.I.Y. attitude.  I think he captured that attitude in a big way here.


Lastly, I cut together a second teaser trailer for Pavement Tune.  I'm not going to take a lot of time to explain it. It features some footage that isn't in the movie and some that is. It also features an awesome song by the Black Keys. Anyway, I'd love to know what you think of it...

Anyway, I hope all is well in whatever world you are currently living on.  I always say I'm going to update this blog more but let's face it... I'm lazy and Blogger blows.  So here's to updating this at least one more time before 2011!