"Just when I thought I was out... they pull me back in"

I honestly thought I would go a month without doing standup, but I just couldn't stay away.  I had a nice variety of shows at the Comedy Factory (including the late late urban show), an event benefitting a group of conservatives supporting gay marriage and open mics.  The feature weekend at the Factory went great and all of these shows flexed different comedic muscles.  I had a great time and a few weeks off certainly did me well.

I have a few more shows coming up, but the short film I'm working on is still on track to shoot from August 18-25th.  I'm pumped.

P.S. No matter what people think of Kevin Smith and his movies... this is one of the most thoughtful, funny, encouraging and beautiful talks about making art I've seen.  Any aspiring comic, writer, filmmaker or artist of any kind should watch it.
Posted by Mike Finazzo at Tuesday, June 25, 2013 No comments:

Spoiler alert: Mud is not the intense thriller that trailers and previews have made it out to be.  Though it has thrilling elements and even a great action sequence, this is a very sweet movie at its core.  I had high expectations going into this one and I have to say that these expectations were exceeded.

One of the things that drew me to Mud was Matthew McConaughey (who shines in an Oscar worthy performance).  With interesting choices and roles in movies like Killer Joe, Magic Mike and The Lincoln Lawyer, McConaughey has been on a roll in the last few years.  Forget stinkers like Sahara, Fools Gold and Failure To Launch; McConaughey has become one of those actors that is magnetic onscreen and makes interesting choices in characters and films.  Even when one of his movies doesn't quite work, his performance is usually hard to not appreciate. 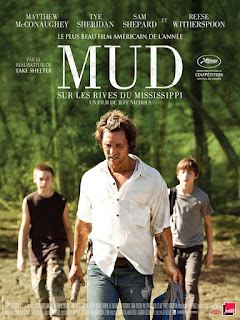 In this movie, McConaughey plays the title character Mud, an outlaw who is hiding in an Arkansas riverbank before being discovered by two impressionable teenagers.  Flawed and complicated but certainly likable, Mud seems to be a dream role for a character actor (something McConaughey has always been at heart) and one that he plays flawlessly in this film.

Not to be outdone, the heart of this film lies in Tye Sheridan, who plays Ellis, one of the teenagers who finds and helps McConaughey's complex fugitive.  I've never seen Sheridan before, but he really is the film's heart and protagonist.  The fourteen year old's character adds a sweetness and a moral compass that was not expected going into this story.

Reese Witherspoon, Sam Shepard, Sarah Paulson and Michael Shannon round out a great and perfectly cast ensemble.  Written and Directed by Jeff Nichols, Mud is methodically paced, exceptionally written and is sure to be one of the most satisfying movies of 2013.  This is definitely a movie I will find myself owning and re-watching multiple times when it comes out on DVD.

I was listening to a podcast (Skeptic Tank w/Ari Shaffir) this morning and the subject of charity came up... Ari's guest Doug Benson mentioned that one of the charities he supports is Smile Train. Curious, I looked up this organization and learned that it is a truly great cause.  If you are unaware, Smile Train started in the late 90's and raises money for underprivileged children with cleft palates. Since it's start, it has provided provided free surgery for almost a million children in Africa, China, India and many other places across the world.  If you have some extra money and are looking for a good charity to donate to, I recommend visiting www.smiletrain.org.

I'm not a huge TJ Miller fan... but this is fantastic.  Check it out.

I had some really good shows this past week and I'm feeling great right now... I have no booked shows in June, so I'm looking forward to napping and working on a movie project for a while.  After 300 sets (in the past 14 months) and recording a new album's worth of material, this break comes at a good time.