I performed six minutes at the 11th Street Lounge in Arlington, Virginia last night.  So far this is the best set I have had since my hiatus and it got a great response.  The set was made up of the new jokes I've been working on for the past two weeks and an older joke I haven't told in roughly two months.  The set went over wonderfully and it was the most fun I've had doing stand up in a long time.

My only critique was that I stumbled into my potential closer (a.k.a. "Spunk Fitness").  This joke still needs polishing on it's segway and introduction but otherwise, the rest of the joke killed.  From start to finish my energy and performance was really sharp and the material is almost matching it.  Overall, I have many reasons to be happy about this show.

I have to give props and thanks to Mike James and Graham Hall for the time.  11th Street Lounge has always been one of my favorite rooms and I hope it only gets better with Mike and Graham (two really funny and nice guys) taking it over.

I did five minutes at RFD in Washington, DC on Thursday.   I'm really happy with the laughs the new jokes are getting and how well they are progressing.  The last bit (which is based on something real that happened to my less than smart ass at a Spunk Fitness) isn't quite there but has the most potential.  It is a longer bit and I have a lot of ideas for it.  I just need to continue working on it and see which lines are the most focused and consistent.  This routine could eventually be my new closer.

I also tried out two new concepts during this set.  I thought of these ideas while talking to my friend Rob Nelson the other night.  It's funny how silly thoughts that come up in conversations with other comedians can turn into ideas which can turn into premises and eventually polished stand up bits.  The ideas got laughs and I sold them well but I would not consider them good jokes yet.

Overall, I'm really happy with the new bits and how they are gelling with the older bits.  It's great to do new things and change things up but progress is the most important thing right now.  I feel like there is a lot of progression in my personal and comedy life.

Sorry for the lack of updates... I'm starting to get back into the swing of comedy and had three shows/open mics this past week.

First, I performed ten minues at Potomac Grill in Rockville, MD last wednesday.  This was a really fun time and performance.  Potomac can be hit or miss when it comes to comics.  Some wednesdays, there are literally twenty-five comedians ranging from touring professionals working out new jokes to open micers performing for the very first time.  On nights like these, it is typical for a comedian to get five minutes of stage time.  With that many comedians, a comic should feeel lucky to get any time at all.  Potomac also has nights where only a handful of comedians will show up.  This is what happened last week.

I was one of six comedians, so fill-in host Ayanna Dookie gave everyone ten minutes (a rare large chunk of time for any open mic).  Being rusty, this was a great chance to work on new bits and also refresh bits I hadn't done in a while.  Like I said, it was fun and the set went over well.  I have to give props to Ayanna for running a good mic.

I followed this performance up with seven minutes at Clare and Don's in Arlington, Virginia on Thursday.  This is a great show run by my friend and very funny comedian Graham Currin.  This show features some of my favorite and most popular comedians in the area... unfortunately this was a strange night.

Management at Clare and Don's (a nice beach themed bar and restaraunt) decided to push the show to the semi outdoor patio.  Graham was really against this idea and rightfully so.  Comedy is tough anywhere but can be nearly impossible outdoors.  There are so many distractions with foot and road traffic so audio can be a big problem.  On top of those factors it started raining and lightning.  The host for the night announced midway through the show that it was being moved in doors because of the bad weather.  This move was going to happen after the next comedian.  Unforunately, I was next comedian.

Despite some of the audience moving inside, my time being cut short and my fear of being electricuted I had a good set.  All the comedians were great that night and it was a good show.  It just happened under weird circumstances on an overall strange evening.

My last stop came at Ragtime in Arlington, Virginia.  This is a very good open mic run by the very funny Rahmein Mostafavi (Cool Cow Comedy).  I had a really good set (my best since my post wedding hiatus) and it was a lot of fun on stage.  The old and new jokes worked and it just reminded me how fun this comedy stuff can be.

Looking at my calender for this summer comedy is going to be slow.  I do not have many gigs on my plate right now and think that I'm going to use this time to write and perform at as many open mics as possible.  It's time to get better.

I did my first set in several weeks the other night at Sonoma's Bar and Grill in Columbia, MD.  The (mostly new) five minute set went over well and it felt great to be back on stage.  I'm looking forward to getting back into the swing of things. 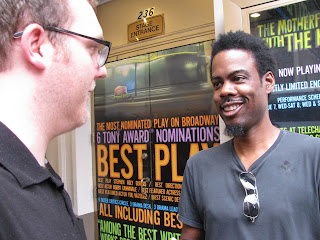