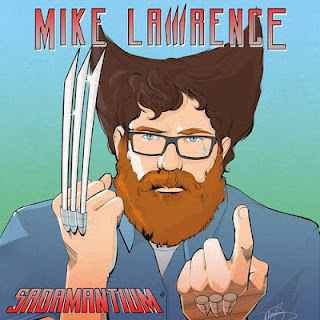 I don't really know Mike Lawrence personally... but we have a few mutual friends and have crossed paths randomly at open mic when I've been in New York.  He seems like a nice guy and has always been very funny when I've seen him.  Last night, I purchased his album (the beautifully crafted and relentlessly funny) Sadamantium and was not disappointed.  Lawrence is quick witted, a great joke-writer and provides more belly laughs in the first five minutes of his debut album than most comedians you'll hear all year.  Bottom line: BUY THIS RECORD!

P.S. as a comedy fan I'm really happy for Mike Lawrence and his success... but the narcissist in me is irritated that I'm not funniest comic with a beard, glasses and/or the name Mike.
Posted by Mike Finazzo at Thursday, May 30, 2013 No comments:

It was the best, worst and most mediocre of times... The show at Sonoma's Bar and Grill in Columbia, MD may have been the worst show I've ever been a part of.  I won't harp on it because this room is dead now (though it probably should have never been born) and it would be beating a dead horse.  This is one of the cases where I will take the paycheck and smile.

After the Sonoma's abortion I took a few days off and followed it up with a mediocre set at RFD in Washington, DC.  I actually got a lot of laughs and even had an applause break but I was not very good.  I was stiff and my energy was low.  I should have destroyed with a crowd like that... but instead I was just blah.  It was also a kick in the pants I needed and made me refocus a bit.

The next night... I got a last minute headlining set at The Comedy Depot in Lancaster, PA.  Though the crowd was small, I had a good forty-five minute set.  All of my material hit and I even had a few improvized moments that went well.  The highlight of this set was when I referred to an audience member as "the guy who killed John Lennon".  Overall, this was a fun show and raised money for a good cause.

Finally, I had a really good sixty-five minute set at Sean Bolan's in Bel Air, MD on Tuesday.  This was one of the shows I decided to record for a possible album and I absolutely crushed it.  I hate it when comics brag about "killing" or "crushing"  (because it's usually false and doesn't mean anything) but I'm going to give myself some credit here.  This was an important night for me and it ended with possibly the best long set I've ever had. This was also the most comfortable I have felt on stage and it was the first time I did an hour where it did not feel like "work".  I'm really proud of this set and can't wait for people to hear it in the (not too distant) future.

What is wrong with me? This is a question I ask myself multiple times a day... Another popular question in my arsenal is: Why do I do this? With a few exceptions, I have had a string of really shitty sets (that were mostly really bad situations before I entered the equation) lately and this has been causing me to ask these questions repeatedly in the lightning round known as my "life".

Maybe I'm being more neurotic than usual... or maybe I'm just a little burnt out. Regardless, I need to say "no" more. For four years, I've tried to be open-minded and really have not turned down many shows. I've pretty much accepted any gig without worrying about pay, location or circumstances. I've used these gigs (especially the really bad ones) to get better and hone my craft. For the most part, I've kept a very high batting average and have found ways to do well or at least have acceptable sets under the conditions but lately the grind has been getting to me.

Tonight, I had a show in DC. This was an improv and standup show that I took despite the very small paycheck because a friend of mine was running it. After hitting traffic, I had trouble finding parking. I drove around for street parking for about fifteen minutes before giving up and looking for a garage. I hate paying a lot for parking, but the show was starting and I did not have the time to continue a search for street parking.

I pulled into one garage and they were full. I had to back out of the garage (which took forever because of traffic) and found another one several blocks away in the opposite direction (which cost about as much as I was getting paid for the show).  After parking, I started walking (the first of ten blocks) to the venue and right on cue… it started raining.  Like a silent comedy film from the 1930’s, it starting pouring as soon as I left the garage.

Soaking wet, I arrived to the show late.  An improv group was already onstage and they had almost as many members with them as there were in the audience.  In a matter of minutes I went from irritable to sad to pissed off to depressed and eventually back to irritated by the time I took the stage. This was not a great combination of emotional to have when trying to entertain people.

My set didn't go well... and that's my fault.  I’m embarrassed about how I acted on and offstage.  I was mopey and it really showed in my “performance”. It's not the fault of the ten audience members that the show wasn't great or that I'm having a shitty day. It was my job to make them laugh and I failed.

I probably should not have been at this show in the first place.  I should have said no to this gig... but I didn't. I accepted it and it was my responsibility to handle the situation more gracefully. I regret phoning it in and things worse than they should have been. I need to work on preventing this from happening again.

But seriously… why do I do this?
Posted by Mike Finazzo at Saturday, May 11, 2013 No comments:

I worked on all new bits last night (which included a more polished version of something I improvised in Warwick over the weekend).  All of the premises have potential and I'll consider this to be a successful Monday night.

I had a really good weekend at the Comedy Zone in Warwick, Rhode Island.  I had some good sets (that ran thirty-two minutes each), stayed in a nice hotel, saw 42, Iron Man 3 and the Mayweather fight for free (because the comedy club was located in a movie theater). I also ironed a shirt for the first time in years and made my own waffle. Overall, this was a very good "road dog" weekend.

My ninety-ninth set of 2013 was fine.  The crowd was sparse and I worked on newer bits and just kind of did okay.  The response was on par with the other comedians with that crowd last night.  Nothing great.  Nothing horrible.  Just... okay.  I'm taking the night off and then going to Rhode Island in the morning.  This weekend should be a fun cluster of shows at the Warwick Comedy Zone.

The new stuff is clicking despite one of these sets being a gigantic waste of time.  Some nights when I drive an hour (each way) and sit around (through dozens of comics) for three hours to work on five new minutes of jokes in front of 5 comics and 0 audience members... I can't help but wonder "why do I do this"?  I can't help but wonder if I am truly any further than when I started this.

Sorry I'm emo... Hopefully tomorrow's post (because I'm an idiot and am sure that there will be another set tonight) will be happier
Posted by Mike Finazzo at Wednesday, May 01, 2013 No comments: