I didn't have any booked shows this week... so I spent my time working on new material and doing open mics. The new jokes are clicking and includes the best line I've written to date. I'm really happy with this new chunk and can't wait to do it this weekend at the Warwick Comedy Zone.

Shalom! How are you? I am fine. If you are reading this... I like you. I don't like "like you, like you" but I do consider you pretty cool and consider you a friend. As my friend you know that I have been doing comedy for the last few years and that it is something I do a lot. I typically hate pushing and promoting shows (I know how annoying it can be to get bombarded and spammed with constant Facebook invites and flyers for comedy shows... so I try to be choosey and conscientious about how much I push this stuff) but I wanted to highlight two upcoming shows I'm doing...

On May 21st I will be headlining a fun show at Sean Bolan's in Bel Air. This is one of my favorite comedy rooms and the Color Me Funny guys (the dudes that run that room) are nice enough to have me close out that show.

After that show, I will be headlining a one off show at the Sidebar Tavern in Baltimore on May 28th. This will also be a fun show that my talented friends Stavros Halkias and Mike Storck (who are doing me a huge favor) are doing as well.

Why are these shows so special? Well first... I'm going to record these shows for a possible second album. I'm a much better comic now and I'm really excited about the comedic evolution from 'Stupid Genius' to 'The Cheery Side of Denial' (the future second album).  So this aspect should be very cool.

In addition, May 28th is my birthday. I'm not saying this to guilt you into coming (though you really should come because it is my birthday and I'm not asking for a gift of any kind. Just come and make your laughter my birthday present. Anyway, you're totally a bad person if you don't go)... I'm saying this because recording an album and celebrating another year of not dying is a good excuse to burn some material. It's been 14 months and about 320 shows since my last album was recorded and I feel really good about the material I've written since then but I'm also tired and have outgrown some of it. This will be a good milestone and time to retire some bits. 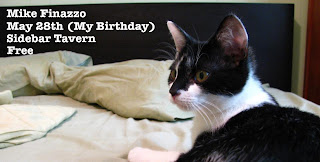 Finally, I'm not going to be doing a lot of standup this summer... I've been keeping this under my hat for a while, but I'm going to be working on a movie for a few months and will have to put comedy on the back burner for a bit. I'm really excited about this movie and think it will be good... but it's going to be impossible to continue doing stand up the way I'm doing it now (anywhere from 5-12 times a week) and direct this film. I have some road work and a few random gigs scheduled in June and July... but besides that, I'll be doing the movie thing (and occasionally eating dinner with my wife) until the September.

So that is pretty much everything. I hope to see you at one of these shows. They will be good. If you can't come, please text me and ask me to hang out. I will either say "yes" or "I got a new phone.... who is this?'

P.S. I'm sorry that this was really long and probably made me sound self indulgent.
Posted by Mike Finazzo at Friday, April 26, 2013 No comments:

I had a few sets this week with very mixed results. My Wednesday (charity) show at the Second Street Comedy Club in Harrisburg, PA was a lot of fun.  My thirty minute headline set was consistently good throughout and certainly a solid outing.  After doing a few charity shows that were (extremely well intentioned but) not good, it was nice doing a benefit in a comedy club with a good audience.  I was very happy with my set here.

My Thursday show at Stables... happened.

I had two shows on Saturday that were a lot of fun. The first show was at the Laugh Riot at the Hyatt (located in the Bethesda Hyatt Hotel) and it was fantastic. This independent room is basically a comedy club inside a hotel (it's run very professionally with a great backdrop and physical layout).  The crowds were attentive and open minded and I had a great time performing here.

After the Riot, I had a very good ten minute set at the Capital City Showcase. This was a great show in a small blackbox theatre.  Despite the mic cord popping out (and not handling this blooper gracefully) it was a solid set. Overall, this was a great night of shows.

I had four really good shows this weekend at Magooby's Joke House in Baltimore  The crowds were great and there was not a bad set among any of the acts over the week.  Having passed my feature audition, the pressure was off and I felt loose at the remaining shows.  I had a really good time on stage and as always it was great working with Vos and the nice staff and crew at Magooby's.

Set number seventy-eight was an important one for me... After two years, seven hosting weekends, dozens of guest spots and several one nighter/fill in MC gigs, I got a chance to feature at my home club (Magooby's Joke House).  Though I've featured in several other comedy clubs before, there is something special about getting a chance to do it in your home club.

Serving as an audition set, I successfully middled for twenty-two minutes.  The crowd was small (which can be tough to handle in a room that large) but my set went over well.  I didn't kill by any means, but I had a consistently solid set with big laughs through out.  I didn't really take any big chances.   I just did my "A material" and had a really good set.

P.S. I'm happy to say that I passed the audition... I will be getting a feature weekend at Magooby's over the summer.  ﻿
Posted by Mike Finazzo at Friday, April 05, 2013 No comments:

Set #77: Touchdown on U Street

I had a really good sixteen minute set at Touchdown in Washington, DC last night.  This was a very good room with a friendly and really attentive crowd.  I had a good time and possibly the most fun I've had (doing my material) on stage in a while.

Despite being very good, all was not perfect.  I still need to cut two lines out of my "mental health" chunk.  It's amazing how these small changes be the difference between a good bit and a great bit.  I will trim the fat before the next time I do the chunk (most likely tonight).

Overall, this was a nice tuneup and confidence booster for my feature spot at Magooby's Joke House this weekend.

I Am Not A Hipster (a non show blog) 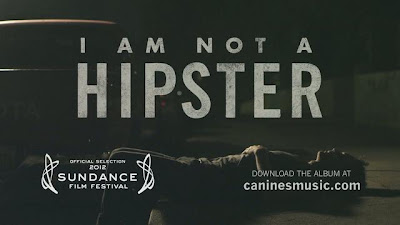 Don't judge a film by it's title... because I Am Not A Hipster is a wonderful movie.  Beautifully shot and acted as well as featuring an amazing soundtrack, I Am Not A Hipster is my favorite movie of 2013 (so far).  Shot on location in San Diego, the movie follows a week in the life of depressed musician Brook Hyde (played excellently by Dominic Bogart).

I Am Not A Hipster is not the type of movie that blows you away with effects, explosions or even a complicated story and plot twists.  It's a character study with relatable but not always the most likeable people (something that echoes films of the 60's and 70's such as Five Easy Pieces and The Graduate).  The performances (acting and musically) drive this one and the results are fantastic.

Despite winning audience awards at Sundance and SXSW,  Hipster is not getting a huge release so be sure to seek it out.  You can find it via VOD or at www.iamnotahipster.com. You won't want to miss it.

To recap: I spoke in a southern accent without breaking character for 25 minutes, I covered the Fresh Prince of Bel Air theme song, "Baby I got yo money" and "Free Bird" on the guitar, I told my "life story" which sounds very similar to the film Varsity Blues, I used another comic as a mic-stand and had a women tell me that I'd be a "lame bitch" if I couldn't name all seven members of the Wu-Tang Clan.... It was a good night. Hashtag: Alternative Comedy.

P.S. I would typically never do those things on stage... but you had to be there.  I'll be back to telling my stories on Wednesday.
Posted by Mike Finazzo at Monday, April 01, 2013 No comments: