After two hundred and three shows and one hundred and twenty-seven blogs... I'm calling it a year. 2011 saw me do a lot of comedy, finish editing a feature film and get a puppy.  Oh yeah, I got married too. 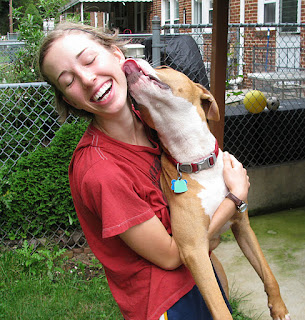 I'm very proud of the strides I've made with comedy this year.  I got to open up for some of the biggest names in comedy (Mencia, Vos, Friedlander), got up in some of the biggest clubs (Carolines, Comic Strip Live) and got to do what I love to do two hundred and three times for anywhere from three to thirty-five minutes a piece.  Most importantly... I improved. 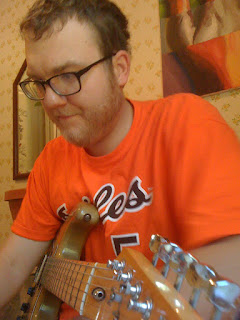 I filmed almost every set I did this year and I saw dramatic improvement in every category from last January to now.  It gives me hope that when I check the tape this time next year... I'll see that much improvement (and hopefully more) in 2012.

Anyway, I hope you have a happy new year and that we see eachother again at comedy show or pumpkin patch near you.
Posted by Mike Finazzo at Friday, December 30, 2011 No comments:

Posted by Mike Finazzo at Wednesday, December 28, 2011 No comments:

Show number two hundred and one was a long set without a microphone in front of a packed house at the Red House Tavern.  It was also my most consistent and possibly favorite set from this year.

Twenty out of the twenty-five minutes were written since September and they have finally taken shape.  I'm really proud right now but realize there is still way too much room for improvement.

Posted by Mike Finazzo at Friday, December 23, 2011 No comments:

At the beginning of 2011 I set two goals for myself.  One was to perform two hundred sets and the second was to keep track of them by blogging.  Unless I die in the next seven hours (which Vegas has at 8 to 1 odds), I should accomplish both of these things.

I'm proud of this but as much as these two hundred sets have made me better... These accomplishments will serve as more of a reminder of how much further I need to go.  I have to get better.

Posted by Mike Finazzo at Monday, December 19, 2011 No comments:

Posted by Mike Finazzo at Friday, December 16, 2011 No comments:

Posted by Mike Finazzo at Tuesday, December 13, 2011 No comments:

I am drinking a Chai as I write this blog.  Sadly, this blog will never be as good as this Chai...

My 192nd show of 2011 came this past Monday at Sonoma's in Columbia, MD.  Overall, this was a very good show.  My set solid and I got laughs throughout.  It wasn't easy following 80 minutes of an open mic contest but the crowd was great.  Despite being tired, the crowd (of around 75 people) stuck around and were incredibly attentive.

I'm most proud of how much new material I did.  Twenty out of twenty two minutes of my Sonoma's set has been written since September.  As a result, I only repeated one joke from my previous twenty minute set at Sonoma's back in April.  That is a lot of new bits.

Set #193 was possibly the most miserable open mic experience I've ever had.  It featured bad comedy (on my part), awful degenerate and heckling groups of people and a blown circuit breaker that cut the microphone four minutes into my set.  It was was a waste of time, money and gas.  On the bright side, I left this open mic refocused.

I followed the worst open mic ever with a pleasant night at Red House Tavern on Wednesday.  On a dare from my friend Dave Shofer, I did some of my "vintage" jokes (some of which I hadn't done in over a year).  This was a lot of fun and surprisingly one of the better sets I've had recently.  After listening back, I'm going to resurrect at least two of these jokes for the CD recording in March.

Posted by Mike Finazzo at Thursday, December 08, 2011 No comments:

Last night I performed at Hightopps for the last time in 2011.  My eleven minute set went over very well and I am still more than pleased with my new material.  I listened back to my set and there are still a few things I would go back and change.  Though it got a big laugh, my set up on "CVS" could have been a lot better.  The same goes for "My Funeral".  I've only done that premise a handful of times and it is getting better... but still needs a cleaner set up.

Hightopps has been my homebase and a big part of hitting my goal of doing two hundred sets this year.   It is not always an easy room but a room that has made me a much stronger comedian.  I'll be back there next year when I headline there (by myself) for the first time.

Posted by Mike Finazzo at Monday, December 05, 2011 No comments:

I worked out six minutes of new material at the Comedy Spot on Thursday.  I only came up with two new bits (as of Thursday) this week but both of them have been getting a good response.  I wanted to get in a second set that night at RFD but ended up getting there too late for stagetime.  Spending three hours driving in a KIA to work out six minutes of comedy will be one of the constants I will look back on for 2011. 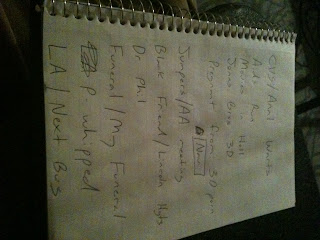 I ended my week with a really fun show at Tigercon at Towson University in Maryland.  This show was part of the Geek Comedy Tour at Towson's yearly comic book convention.  I was really nervous about this show because I do not do a lot of "nerd centric" material but my fifteen minute set killed.  I even got to include two brand new bits that went over very well.  The audience of two hundred was one of the best and enthusiastic crowds I've had in a while.  Awesome experience.

Posted by Mike Finazzo at Sunday, December 04, 2011 No comments:

After polarizing the audience at Busboys Monday... I had two sets with mixed results on Tuesday. The first came in a very good twelve minute set at Ellies Place in Millersville.  Ellies is a monthly open mic that is notorious for loud video games and non-existent crowds but Tuesday was surprisingly good.  My set consisted of two new premises ("Vanilla Dipper" worked but the other one did not) and other jokes I have been working on for the last month.  This was a consistently solid set with good laughs throughout.
After Ellies I drove across town for a ten minute set at Allstar Bar in Baltimore.  As stated in previous posts, this is a room I go to every week to try out brand new premises and ideas.  It is getting harder and harder to talk for ten minutes without repeating myself every week and it showed this past tuesday.  Despite struggling, two brand new premises (out of ten) are going to be good jokes. 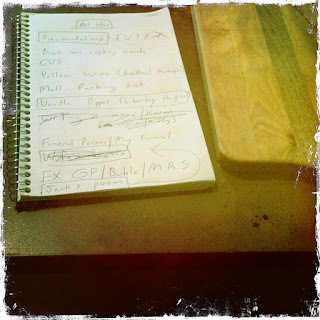 On Wednesday I performed a set at Red House Tavern in Canton.  This ten minute set was one of the best shows I've had in a while.  Made up of bits written in the past month, every joke connected.  It felt very good.  With just a little more tightening and polishing, these bits are going to be ready for the taping in March.


Posted by Mike Finazzo at Thursday, December 01, 2011 No comments: