I always wondered what would happen if someone found my notebook...

For the most part, I do not write out bits.  I usually write a keyword or bullet point down and then talk out a bit at open mic nights.  I repeat that process dozens of times until these bullet points/ideas become jokes/bits and then eventually becomes an act.  This is how I create material.  Aside from a few random jokes/ideas (that I want to remember very specific wording from the beginning) my notebook is littered with random phrases, premises, thoughts and things that out of context seem crazy. 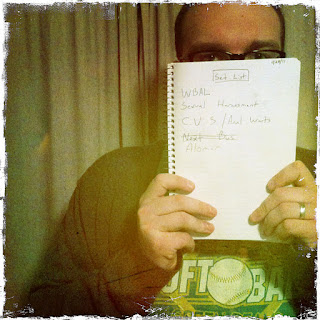 After filling my old notebook, I bought a new one this past weekend.  "WBAL", "Sexual Harassment", "CVS/Anal Warts" and "Next Bus" (which was later replaced by "Alomar") were the first words written in this brand new black Five Star notebook.  To me this was tonight's set list but if left in a taxi, on a bench or God forbid at work... could come across as thoughts, potentially insidious notions and digressions of a serial killer or a mental patient.  Out of context, this list could be construed as a random itinerary or at the very least codewords by a Masonic or terrorist group of some kind but in reality it represents the scattered thoughts and ramblings of a moronic and neurotic stand up comedian.  Some could and would argue that the latter is worse.

P.S.  My nine minute set at BB&P was fine.  "Alomar" was too dirty/polarizing and I should not have done it (let alone closed with it) at this venue.
Posted by Mike Finazzo at Monday, November 28, 2011 No comments:

I had a good ten minute set at Growlers in Gaithersburg last night. I stumbled at the beginning of one joke late in my set, but got consistent laughs and did well as a whole. I dusted off two older jokes that I haven't done in a while and did my new closer. The show had a great crowd (sixty-ish people) and an amazing headliner in Erik Myers.

Posted by Mike Finazzo at Monday, November 28, 2011 No comments:

My one hundred and eighty-second set came at the Allstar Bar in Baltimore on Tuesday.  There was not much of a crowd (five comedians/eight bar patrons) but my eleven minute set went over very well.  I've been in storytelling mode for a while now and this format has been working for me.  Two stories that I started telling Monday (at Sidebar) have been killing and are bound to be set staples.  The only mistake I made was stepping on a laugh during my final bit.  I should have held for the laugh longer.

I followed Allstar with a ten minute set at Red House Tavern on Wednesday.  This was a good set and a great pre-thanksgiving crowd.  The new stuff continues to progress and I closed with an old bit that did very well (despite my timing being a little off on the older joke's punchline).  Again... I made the mistake of stepping on a long laugh.  It killed the laugh that the tag of the joke usually gets.

I need to fix that.

Posted by Mike Finazzo at Friday, November 25, 2011 No comments:

Four sets this week... I worked on a lot of new jokes (most of them working well) and dismantled a drunken heckler at RFD on Saturday.  All in all, it was a very productive week and I hope to get in a few more mics before Thanksgiving.  Good times.

Posted by Mike Finazzo at Monday, November 21, 2011 No comments: 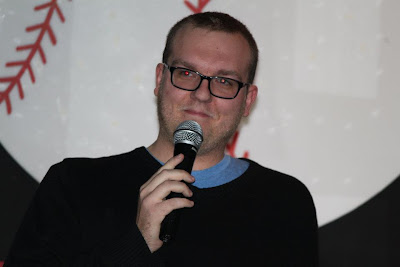 I've done four sets since Sunday and there was little to no bombing.  I've been working on three brand new premises this week and two of them are keepers.  The highlight of the week was my set at Busboys and Poets in Arlington.

I enjoy doing shows at Busboys because it is made up of mostly poetry.  A lot of these poets are extremely talented but all of them are incredibly sincere.  As a comedian, these shows force you to be genuine and earnest (something we should be doing anyway). This set featured a lot of storytelling and my 9 minutes was one of my better received sets in a while.

In other news, I have coined the phrase "Jewneral"....


P.S. It's official.  My first live CD recording is happening on March 4th.
Posted by Mike Finazzo at Wednesday, November 16, 2011 No comments: 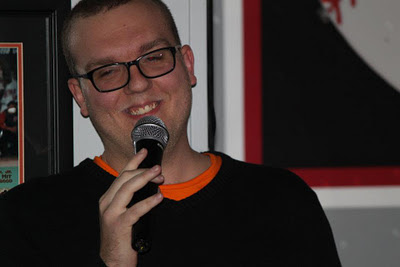 I had a good 8 minute set at Allstar Bar in Baltimore (despite being pissed at myself for messing up the wording on one of the new bits).  I followed up this set with a stellar 8 minute set at a dirty (extremely offensive) show at Red House Tavern in Canton.  The dirty show set consisted of material just for the dirty show and went over very well. I'll be back at Red House﻿ as the featured comic (doing my "regular" bits in two weeks.
Posted by Mike Finazzo at Thursday, November 10, 2011 No comments:

Posted by Mike Finazzo at Tuesday, November 08, 2011 No comments:

I did two sets tonight in Baltimore, Maryland.  The first set came via a six minute guest spot at The Reserve in Federal Hill.  Mediocre is the most positive word I can think of for my performance.  This was a yuppy-ish crowd and they were certainly polarized by the "edgier" material.

Ultimately, I did not make enough adjustments during this set and it provided mixed results. I was also distracted by a table occupied by a kick ball team (I know this because they were wearing kick ball uniforms).  I should not have let them get to me...After one joke, a girl at this table gave me a very loud "womp wah".

I'm assuming this girl will stumble across my blog at some point (because my shit is blowing up)...  so to her I say: I work hard on jokes and just because you didn't get it, doesn't mean you should drunkedly mock me to your drunk yuppy friends.  Also, you should consider playing a real sport like... Teather Ball.  P.S. Eat shit.

After show one, I raced over to Canton for a ten minute set at the Red House Tavern in Canton.  I was very happy to get this set in, because I got a second chance.  I fixed a few of my mistakes and saw instant results.  It was nice rebounding the same night and not having to wait until tomorrow.   Overall this was a really good set.  The new stuff continues to hit and take shape.   I feel great about the progress.

Special thanks to Dave Shofer for putting me on his shows.


P.S. I know my shit isn't really blowing up.
Posted by Mike Finazzo at Wednesday, November 02, 2011 No comments: