I did 6 minutes at a cool open mic in Arlington, Virginia.  The mic was at a venue called Busboys and Poets and was open to poets, storytellers and comedians.  I had a very good set in front of a packed house and learned a lot about the new jokes I'm telling.  Besides flubbing one line, this was a very strong and well delivered set.  The response was great too. 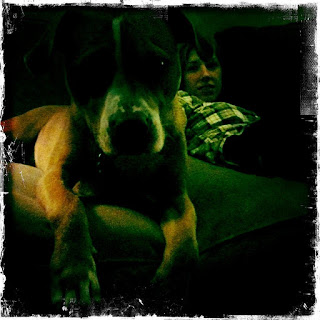 P.S. It wasn't just me... Every comedian on the bill struggled. It was still a fun and character building evening.
Posted by Mike Finazzo at Saturday, October 29, 2011 No comments:

I left my six minute set at the Comedy Spot in Ballston, Virginia feeling better than I have in a while.  The set was made up of mostly unpolished material, including two brand new jokes that I thought of this week.  Despite botching a joke, every punchline got a really solid laugh and did incredibly well.

It is amazing how a good set can turn your day around...

Posted by Mike Finazzo at Thursday, October 27, 2011 No comments:

I had two good sets on Monday and Wednesday... The 12 minutes at Sidebar and 9 minutes at Red House Tavern focused mostly on new material and concepts that I came up with recently.  The new jokes (mostly from Red House) have a lot of potential.

Posted by Mike Finazzo at Thursday, October 27, 2011 No comments: 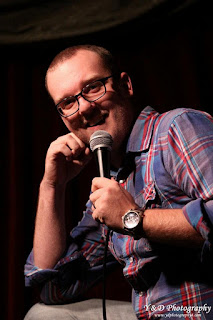 I did a 16 minute set at Vespucci's in Fairfax, Virginia this past Friday and it went over well.  I continued polishing long form bits and used alternate tags on older bits.  Due to working on new material, this was the first time I worked on some of my older bits.  For the most part, I delivered these jokes well and got a great response. 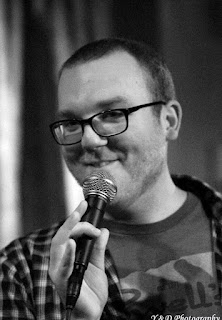 I followed up Vespuccis with a 19 minute set at the Varsity Lounge in College Park and a 23 minute set at Growlers in Gaithersberg.  These were fun shows and the long sets went over well.  My new closer/story has been killing and is tying the whole set together in a very nice way.  I really liked doing these longer sets and am proud that I did not do all of my planned bits.  It has been nice doing 20 minutes without it feeling like 20 minutes.  I'm confident that I can go anywhere and do a killer 30 minute set.

Posted by Mike Finazzo at Thursday, October 20, 2011 No comments:

I did ten minutes at the Allstar Bar and Grille in Baltimore, Maryland tonight. I'm still working on the new bits from the past month and I got laughs. However, a new joke bombed and I screwed up the wording on two of the newer bits. One bit is close to five minutes long and there is a lot to remember. There are a lot of digressions and jokes within jokes, so repetition and practice are the only things that will help me with the wording.
It was one of those nights where on the surface I did well and got a good response... but I know I was off.

Posted by Mike Finazzo at Tuesday, October 18, 2011 No comments:

I did twelve minutes at Sonoma's Bar and Grille in Columbia, Maryland tonight.  I continued to work on new bits and polish the material I have been working on for the last month.  My new closer is working out very nicely.  I need to cut out a few lines and do some polishing but it is going to be a killer chunk.  The new opener I have been using is also working out well.  I think this is going to be the opener for my long sets as well.

I got into New York City on Friday afternoon and got to work quickly. My first of five shows came via a showcase at the Comic Strip Live! in the Upper East Side. 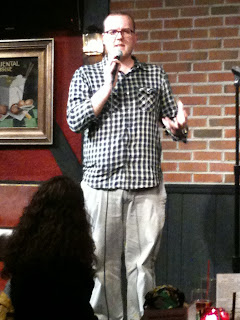 The show at the Strip went very well but included a few interruptions.  During the seven minute set I delt with a cellphone ring and three heckler/participators.  A year ago, I would have froze and/or shit my pants in this situation but Friday I handled it all very well.  Each heckler repsonse got a laugh and the last one got a big applause break.  I'm proud of the composure I displayed during this set.  I got a lot of great feedback from the booker at the Comic Strip and will be returning soon.

I followed up the Comic Strip Live show with two sets (one friday/one saturday) at the Creek and the Cave in Long Island City.  This was a fun and supportive venue to comics.  I had two good sets (with the better one) on Friday and worked on a lot of new jokes.

Saturday evening was the most unique of the NYC shows when I did an "Apartment Mic" in Williamsburg (a Hipster Section in Brooklyn).  An apartment mic is exactly what it sounds like... Someone sets up a mic and PA in their house and invites people over.  Some shows (In New York, Baltimore and the rest of the world) can suck and bar shows can feature a million interruptions and distractions.  Atleast at an apartment mic, everyone is there for the same reason.

This mic was at Andy Walsh's apartment (a comedian friend of a friend who I met at the Creek) and seated about twenty people.  Going to someone's apartment you don't know can be daunting and a little scary (I was a little worried that I would end up the backend of a Human Centipede) but this turned out to be great.  Everyone was really nice and supportive and I recommend every comedian does one of these shows.  A good set was a bonus to the night.

I finished up the New York tip with a set at the Perch Cafe in Park Slope.  The nine minute set was spent telling stories and working on new bits.  It wasn't filled with laughs but I think people was engaged with the stories and enjoyed it.  I finished on really big bits and laughs but still need to cut the fat on some of these jokes. 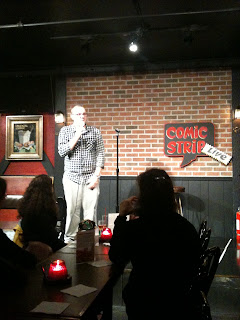 Overall, this was a great and productive trip to the Big Apple.  I have to give a special thanks and shot out to my friends Will Carey, Ben Rosen and Bryan Preston for showing me the ropes and hitting up some rooms with me.  I met a lot of really cool new people and gained a lot of experience from this trip.  This was definitely a confidence builder.

P.S. If you are in New York... Eat a donut from the Donut Pub and a slice from Ben's Pizzeria. You can thank me later.
Posted by Mike Finazzo at Monday, October 17, 2011 No comments:

Before my trip to New York, I did 5 minutes of mostly new material at Magooby's Joke House in Baltimore Md. ﻿ ﻿The new set was made up of bits I had been working on over the past two weeks.  These jokes are also my darkest and arguably most "offensive" joks to date and for the most part went over very well.  I think with talking about my marriage and being non-threatening in general, it helps me get away with this stuff.  I missed one line in a new joke that will make it a strong bit but overall this was a very good set.

Posted by Mike Finazzo at Wednesday, October 12, 2011 No comments:

After a few rough sets this week, I bounced back with two good sets tonight.  The first took place at the Comedy Spot in Ballston, Virginia.  The eight minute set consisted of all material developed over the past few weeks.  My first three jokes in particular popped...

I had been working a lot on the wording and phrasing on these jokes and it was nice telling them well.  I also used this set to get rid of two bits that I had been trying.  These jokes are an example of jokes that I am really proud but never really translated to crowds.  The jokes are a bit dark but I may revisit them in the future. 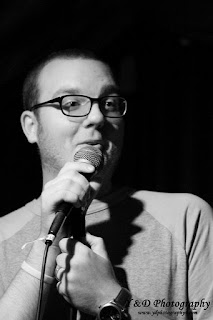 After the Comedy Spot, I jetted over to RFD in Washington, DC for a six minute set.  I had to change my set list on the fly because the comedian that went on before me covered a few of my premises (something that is bound to happen when you're on a show with twenty other comics).  Every joke connected and got really strong laughs from the crowd of fifty or so people.  The two new jokes I focused on at Comedy Spot received even bigger laughs this time around.

Overall, it was a great cap to a really good comedy night.

Posted by Mike Finazzo at Thursday, October 06, 2011 No comments:

I started off the week by doing an eight minute set at Growlers in Gaithersburg, Maryland. The set was made up of mostly polished material and went over very well. Despite the Ravens game and near by traintracks, I kept my composure and gave a really solid performance.

I followed up Growlers with a good fifteen minute set at the (now defunct) Bananna Cafe in Washington, DC. The new stuff is gelling and going well and I improvized two jokes that are becoming good jokes. I also had a good amount of fun picking on a member of the audience named "Justin" (I don't care what he says... his name was Josh).


I followed up these sets with two sets at Allstar Bar and Potomac Grill. The sixteen minute and twelve minute sets were kind of rough but certainly built character and material. When you do all new bits, there are going to be a lot of rough patches and growing pains. This week certainly featured a lot of both.

Though my batting average was lower when it comes to getting laughs (they should be when you do 10-15 minutes of new stuff weekly) the jokes that have hit have been big. I've been throwing a lot of things against the wall and seeing what happens... I've certainly been thrilled with what has been sticking.

Posted by Mike Finazzo at Thursday, October 06, 2011 No comments:

If you  are looking for a Mike Finazzo fix, please go to Itunes and download my episode of Digression Sessions.  It is a really funny podcast with Mike Moran and Josh Kuderna that I recorded last week.  It was a fun time and a good listen.


P.S. Watch 50/50.  I was really looking forward to this movie and it still ended up exceeding my expectations.  Joseph Gordon Levitt, Seth Rogen and my future third wife Anna Kendrick are all fantastic in it.
Posted by Mike Finazzo at Saturday, October 01, 2011 No comments: