I hosted five shows at Magooby's Joke House this past weekend. It was a very fun weekend and I enjoyed working with the weekend's headliner and my good friend Mike Storck (if you do not know who Mike Storck is... stop reading and google him).

Storck is truly one of best comedians working right now. He is one of the Baltimore guys that has done well for himself and does this for a living now. Comedy may be a job for him but you'd never tell by talking to him. When not performing, the dude eats, sleeps and dreams about comedy. It's not a 9-5 desk job that he gets burnt out on. I know this, because it isn't uncommon for me to talk to him in person or on the phone for three hours about comedy right before or after a show. On top that, he's just a solid guy.

As for the shows themselves, they went well. I hosted Magooby's New Talent Contest on Thursday. This was a lot of work and a really long show (almost three hours). Though it was tiring, this turned out to be a really good experience. I had a lot of fun riffing and improvising in between comics. It's also a fun learning experience following comics that crush, bomb or end up somewhere in the middle (you get a lot of each at a show with fifteen open mic comedians).

I opened the Friday early show with a pretty solid twelve minute set. The late show felt a little rougher for me. When I watched the video, I notice my body language and posture were terrible. I was very tired and you could tell. My rhythm wasn't great and I wasn't terribly comfortable on the first show and I was even worse on the second. This was a night that I relied on my comedic survival skills.

After doing comedy for a while, you learn certain tricks and gain certain muscles to work with. A good comic finds ways to squeeze laughs out of times that he is off and even not funny. I did this very well on both shows Friday. Despite being rusty, tired and not very funny, I found ways to get laughs. I take great pride in that.

I took the "game film" seriously on Friday and recovered Saturday. I had a solid set on the Saturday early show and an even better set on the later show. I felt way more comfortable and confident during these shows. The timing was light years beyond what I did the day before, and as Storck said afterwards, I "nailed it."

Saturday also marked two other milestones for me. First, it was my birthday (yes, I'm getting old). Secondly, I wore a suit for the first time on stage. Our feature act Sonny Fuller tends to dress like a homeless person... so Mike and I thought it would be funny to wear suits for these shows. We did because we are wacky.

I'm getting ready to leave for my honeymoon, so I'm back to being inconsistent with the stand up and performing. I really miss the grind and pace I was on, but taking this vacation and break is important too. I will be back full force with comedy by the end of June. Until then... Grown Ups is a really shitty movie.

I performed 7 minutes at Potomac Grill on Wednesday. Due to illness and wedding plans, this has been a really slow month for me.... so it was nice just getting out and doing some time. The results were good too.

I tried out a new joke inspired by my recent nuptials and it killed... The jokes continue to get more personal.

My first set since getting married took place this past Wednesday at Potomac Grill in Rockville, Md. Despite a small audience (20ish people) this ended up being a good set. It also introduced me to a problem that I didn't think I would have... referring to my wife as my wife (and not my fiance or girlfriend).

My next set was at RFD on thursday. As usual, this was a great crowd (atleast 100 people) and I got a great response. However, I still feel like I stumbled through this set...

I was working out the wording on new jokes and older jokes that I haven't done in a while. I've gotten a lot better at selling jokes and even when a joke isn't working or the wording isn't there, I can usually squeeze a laugh out of it. Despite not getting a good rhythm and still figuring out half of my set as I was doing it, I got a great audience reaction.

My last show of the week was at Hightopps Bar and Grill. This show happened...

I haven't had a lot of time for updates... but here are two quick overviews on last week's shows.

Illusions on 5/13: I had a pretty good fifteen minute set. It was a small but fun crowd.

Magooby's Joke House on 5/14: This show provided the biggest crowd I have ever performed in front of (300+ people). The only critique I give myself is that I ran over my set time. I was supposed to eight minutes and I went over by thirty seconds. Still... I crushed this one.

Again, I apologize for the lack of updates. I hope you understand I've had a lot on my mind... 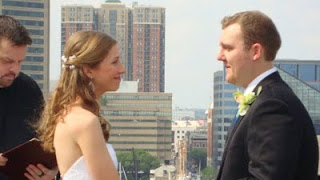 I performed ten minutes at Sonoma's Bar and Grille in Columbia, Md. This was a fun set in front of over one hundred people (which is very rare for a Monday night). The set was mostly made up of the new jokes I've been working on... After watching the video, the only thing I would do differently is work the whole room. I focused too much on the right side. That is an on going critique of myself. I need to focus on it more.

Overall, I was really happy with this set. I have to give major props to Erik Myers... He crushed it tonight. Amazing to watch.

I did seven (mostly new) minutes at Hightopps last night. The new bits are at times personal and leaning towards the more raunchier side. The set included talk of goals, the NYC subway and a coming of age story about a man and his turkey. I watched the video back... it was a good set. Once I tighten the jokes up, they're going to be really solid.

Three more shows left on the "Farewell to Freedom Tour"... then I'm married on Sunday. Should be fun!