Baby I got yo money

Posted by Mike Finazzo at Sunday, September 19, 2010 No comments:

I was part of the "Baltimore's Next Superstar Contest" last night. I finished 4th. Ok, I didn't even finish 4th, but I didn't finish in the top 3....So I am assuming that me and the other eight comedians all tied for 4th. I have said multiple times before tonight that "I rather be known as a 'good comedian' than a 'comedian that wins contests'". But for some reason this stings.

Baltimore Comedy Factory holds this contest yearly. I don't know why they call it "Baltimore's Next Superstar". Its not American Idol. Its not America's Got Talent. Its a comedy contest where comedians gather to tell jokes about O'bama, Tiger Woods and kicking girls in the stomach (all topics covered). So to call the contest "Baltimore's Funniest Comic" would be acceptable. "Baltimore's next comic who brings the most people to Baltimore Comedy Factory on a Wednesday night" would be pretty suitable....but to say the winner of this contest would be labeled a "superstar" is kind of an insult Mary Catherine Gallagher and all the people that were previously named "superstars". All Kidding aside, the winners and most of the comedians were very very funny and deserving people. It was cool sharing the stage with them...and also performing on the same stage as my comedic idol: Louis CK.

So anyway, without further ado....here is video of the set that put me into an 8-way tie for dead last at "Baltimore's Next Superstar".

Posted by Mike Finazzo at Wednesday, September 15, 2010 No comments:

Hangin' at the Double Deuce 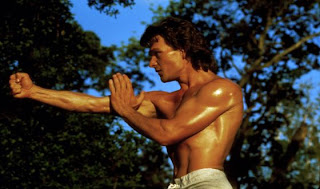 So I had a gig at a "redneck bar" the other night. It turned out to be a great time with a packed and very receptive audience. I did some new jokes and dusted off some old ones too. I really did have fun and was surprised that the set went over as well as it did. However, my favorite part of the night came after my set....
A drunken redneck with a Vandyke (note: a lot of people would have referred to his facial hair as a goatee, but its important to point out to that a Vandyke is when a guy has a mustache and hair on his chin. Not a goatee, but a Vandyke) came up to me and said: "I just want you to know I was the one in the back bashin' ya. Yup, I was bashin' you. I just want you to know that you weren't very funny tonight... but you gotta a lot of balls for getting up there".
It is important to point out that he wasn't mean. He didn't come up to me and yell: "You suck!" It was the equivalent of a guy listening to a bar band, getting drunk and at the end of the night going "I SHOULD START A BAND! I COULD BE A SINGER! YOU GUYS NEED TO PLAY SOME MORE SKYNYRD! I LIKE BEATS! NOT LIKE MUSIC BEATS! LIKE VEGETABLES AND SHIT!"
Anyway, I had a great time and a good set in front of 150+ people... but it was the one guy that gave me the greatest compliment I've never gotten. Stuff like that keeps you humble.
Be well,
M
Posted by Mike Finazzo at Monday, September 06, 2010 No comments: